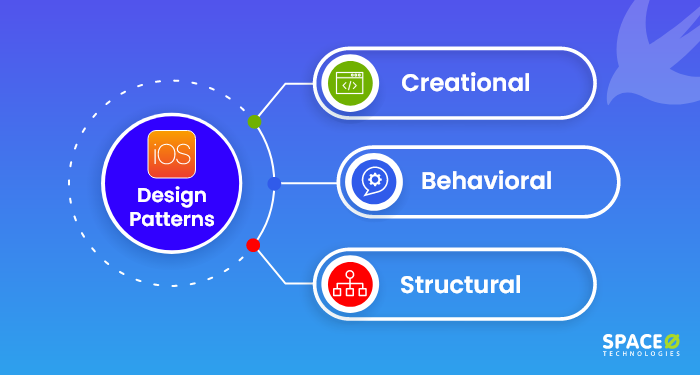 You might have heard this phrase, “complexity is chaos, whereas simplicity is beauty”.

The iOS design pattern simplifies your code and helps you to build powerful app solutions in less time. If you are planning to build a career as an iOS developer, it is essential for you to understand design patterns.

By understanding the iOS design pattern and applying actively in your app development, you increase your chance to be in the top Apple app developers. Currently, the overall earnings of iOS developers have touched $200 billion U.S. dollars as of Jan 2021.

If you are planning to make a successful career in iOS app development it is essential for you to understand the different design patterns.

Being a top iOS app development company, we use iOS design patterns in most of the applications.

The iOS design patterns are divided into 3 main categories, creational, structural, and behavioral. Let us discuss each design pattern in detail.

What are iOS Design Patterns?

iOS design patterns help to provide reusable solutions to frequent problems such as implementing complex code structure, and code management while designing software. In short, it is a template to help you reuse and understand how to write code.

There are multiple types of design patterns to build seamless iOS applications. You might know how to develop an iOS app, but, to design iOS apps effectively and in the minimum time, you need to understand iOS design patterns.

What are the Types of Software Design Patterns

We have discussed each iOS design pattern in detail along with their subparts. Also, the information contains when to use a design pattern, example, and testimonial of a specific design pattern. Apart from this, you may also require the best iOS development tools, which will help you to make your development process easier.

Want to Validate Your App Idea?

Our experienced iOS mobile developers have built more than 2800 apps and will help you to build yours too. 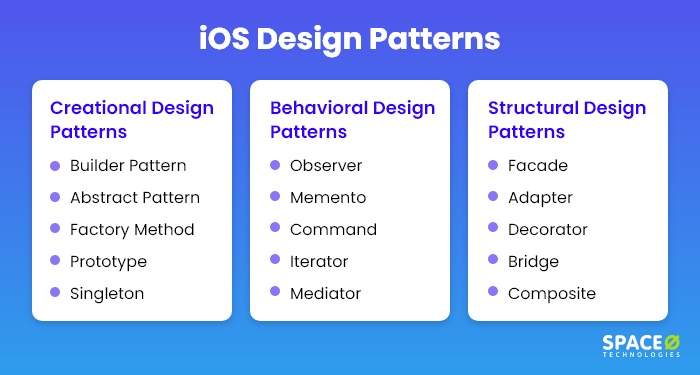 The Observer is dependent on other objects. This design pattern displays publish and subscribe models. The Observer pattern utilizes 3 actor classes which are Subject, Observer, and Client.

When to Use Observer

The main work of Memento is to save objects like Archiving, UserDefaults, and NSCoding protocol with the use of CoreData. However, the privacy of the data stays intact.

When to Use Memento

The Memento externalizes and captures an object’s internal state so that it can be restored later. This technique is frequent among do-it-yourself mechanics, who are repairing their cars’ drum brakes. The drums on both sides are removed, revealing the right and left brakes.

The Template Method is a behavioral pattern that is often regarded as the algorithm’s backbone, delegating responsibilities to subsystem stages. This allows subclasses to redefine an algorithm’s phases without affecting the overall structure. The algorithm is broken down into several parts, each of which is expressed in numerous ways using the template approach.

When to Use Template Method

You’re creating software to shoot and save images, which requires the use of the device’s camera (iPhone or iPad) and photo gallery. As a result, you can use a specific algorithm to implement the PermissionService base class.

You must create two subclasses with the names CameraPermissionService and PhotoPermissionService, which will reinvent some algorithm phases while keeping others the same.

Here are the top iOS app solutions we have built for our clients using different iOS design methods. You check the features and functionalities and get inspiration from these app designs.

When to Use Facade Design Pattern?

The startup of the computer is the ideal example to explain a Facade design pattern. When the computer starts it is dependent on many hardware such as memory, hard drive, motherboard. To reduce the complexity of the task, a computer will display all the functionalities using a single interface.

The Facade design pattern does the same by hiding the complexities of the system by permitting the client to easily access a system.

The Adapter works as a structural design pattern permitting objects with incompatible interfaces to help them work together. In short, the Adapter helps to transform the interface of an object and expect them to adapt it to a different object.

The characteristic of an Adapter is to wrap an object, which means covering it using another object. It is possible to wrap an object which handles adapter meters that are used to perform data and feet conversion.

When to Use Adapter?

Let’s say, you have a Bird class with the methods fly() and make sound(). In addition, there’s a ToyDuck class with a squeak() method. Now you’re running low on ToyDuck objects and want to replace them with Bird things. Birds have some similar capabilities, but their interface is different, so we can’t use them directly. As a result, we’ll employ the Adapter pattern. ToyDuck would be our customer, while Bird would be our adaptee.

Decorator patterns are a type of structural design pattern which permits you to wrap new functionality in handy wrappers and dynamically connect them to an object.

When to Use a Decorator Design Pattern?

When there is a requirement of the extension, the Decorator design pattern is used. For example, the features in the Windows operating system require “optional” features such as title bar, status bar, and scrollbars.

This design pattern is also used in objects that support the extension using “decoration”. Those objects share a common interface, traits, or superclass, and even intermediate superclasses as well.

The Decorator dynamically assigns new responsibilities to an object. Decorators are ornaments that are placed on pine or fir trees. To make a tree look festive, add lights, garland, candy canes, glass decorations, and so on.

The ornaments have no effect on the tree’s overall appearance, which remains recognizable as a Christmas tree regardless of the ornaments used. Additional functionality can be demonstrated by the installation of lights, which can be used to “light up” a Christmas tree.

Ready to Develop a Custom iOS Application According to Your Requirements?

Want to discuss your app requirements with our experienced iOS app developers?

The Builder pattern permits you to develop simple objects from complex objects using step by step procedure. In addition, you can create varieties of object views using the same code in the Builder design pattern. A complex object that requires initialization of nested objects and multiple fields, even the code is hidden inside the constructor with a lot of parameters.

Now, to solve this, the Builder design pattern is required to separate the construction of the object from its own class.

When to Use Builder Pattern?

The Factory pattern and the Abstract Factory pattern have similar options. It does not define the implementation class, but it does assist in the creation of a group (family) of objects and then select the appropriate objects out of the group. Class Cluster is another name for this design. In the app code, the abstract pattern creates a public class.

When to Use Abstract Factory Class?

Consider the following scenario: we wish to construct a global automotive manufacturer. If it was a Factory design pattern, it could only be used in one area. However, we’ll need many sites and some significant design alterations for this pattern.

Car factories, such as USACarFactory, and DefaultCarFactory, are required in each area. Now, our app should be able to detect the place where it is being used, allowing us to select the proper car factory implementation without even knowing which car factory implementation would be utilized internally. This also prevents someone from dialing the wrong plant for a specific location.

We’ll need another layer of abstraction here to detect the location and utilize the relevant car factory implementation internally without even giving the user a hint. This is precisely the issue that an Abstract Factory pattern is designed to address.

When you just need to duplicate one piece from the entire pattern, this design method is required. It describes all objects on the screen and provides a variety of functions, such as duplicating a certain object once or several times, selecting the appropriate location for the duplicated piece, and so on. It could, for example, be an iOS-based UseDefaults object.

When to Use Singleton Design Pattern?

This design method is the best to apply when you are required to manage resources. Rather than establishing 1 million HTTP clients to a single client, which will surely result in slow and waste a significant amount of time. We need to replace a Singleton with a connection pooled HTTP client, that will be resource friendly and faster.

When you just need one instance of a class or a single object copy, the Singleton method is implied. The access is granted globally to a single instance. It uses a lazy loading approach to develop the single instance during the first try.

Do you want to validate your app ideas and get a free quote from our iOS app experts?

What are the Benefits of Using iOS Design Patterns?

The design pattern defines the interfaces in a better way and is specific to certain devices. However, it will be up to you how you are using the code and adding the code to a specific template. The below table covers the benefits of using iOS design patterns.

What design pattern is used mostly for iOS apps?

MVC pattern, which is known as Model View Controller, which is a building block of Cocoa and is a frequently used design pattern. This design pattern performs the classification of varieties of objects based on their application and supports polished code depending upon its role.

How many design patterns are there in iOS swift?

What are the core differences between the architectural pattern and design pattern?

Both architectural patterns and design patterns have many differences. The below table contains the core differences between the two of them. Please have a close look at it.

By applying the discussed iOS design patterns will help you to make drastic improvements in your app development.

If you are looking to build iOS mobile apps, consult our experienced app development team. Being the top iOS mobile app development company, we can help you to build a fully functional iOS app as a newbie developer using the latest iOS design patterns. Our iOS developers have built more than 2800 iPhone apps for businesses across the globe.

WordPress Hit With A number of Vulnerabilities In Variations Prior To six.0.3

8 Tricks to Put together Your Group

requireNativeComponent was not discovered within the UIManager – React native (IOS)

Tips on how to Design Emails for Darkish Mode

WordPress Hit With A number of Vulnerabilities In Variations Prior To six.0.3

8 Tricks to Put together Your Group