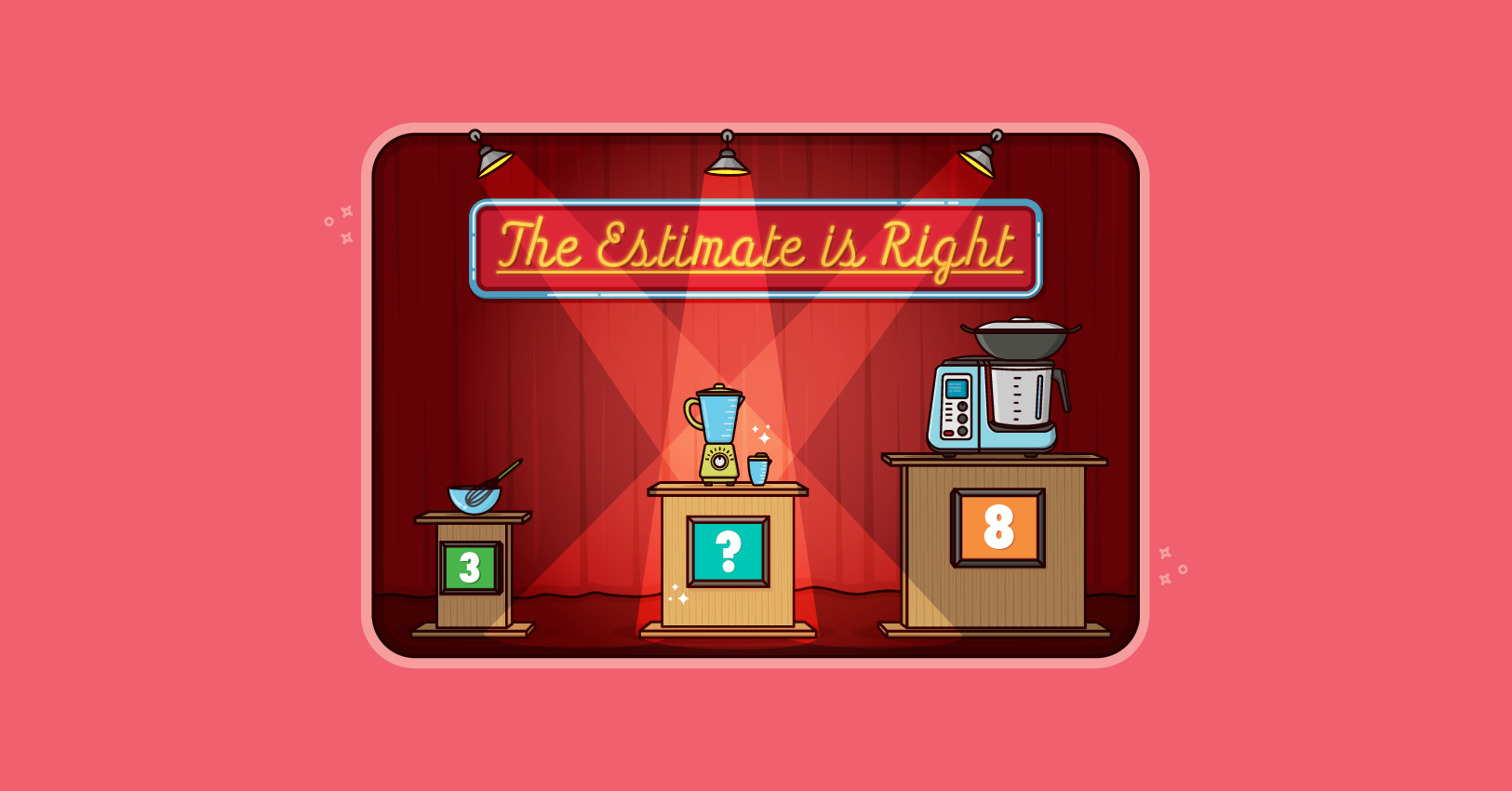 The team should consider that ratio, asking themselves, “Does C seem like it will take four times the effort of A?”

It would be ideal for a team to compare each item being estimated to all previous items. But doing so would mean that a team’s 100th item would be compared against all 99 previously estimated items.

This is too inefficient to be seriously considered.

A more efficient strategy is to compare an item being estimated to two previous estimates. This technique is known as triangulating.

For example, if a team is thinking of estimating an item as 5 story points, team members should compare it to items previously estimated as 3 and 8, if using the Fibonacci scale. It’s also a good idea to occasionally compare against an item thought to be of the same size rather than one lower or higher. So when considering a 5-point estimate, team members might compare against items estimated as 3 and 5 or 5 and 8.

When I do this on, let’s say, a 5-point item, I ask team members, “So, if we estimate this as 5 points, we’re saying it is around 50% bigger than this three-point item. Does that seem right?”

If it does, I’ll ask a similar question comparing the item to one with a larger estimate, an eight in this case. I’d say, “And we’re saying it’s about half the size of this 8-point item. Does everyone agree?”

It’s important to select good backlog items for the comparisons. If your team feels like a particular item was incorrectly estimated, you should not use that item in future triangulations. Doing so would lead to incorrect comparisons that will lead to bad new estimates.

What I’ve found most useful is compiling a list of good items to use for comparisons. I can then refer to that list any time I need to find a good comparison item of any size.

While compiling this list of good backlog items to compare against, I find two criteria important:

The first point eliminates anything that was poorly estimated, such as a 5-point item that team members now think should have been estimated at 13 points.

The second point excludes esoteric items that were understood by only a small subset of the team. For example, a story may have been well estimated (the first criterion) but if it was only worked on and understood by two team members, it’s not a good item to add to the list.

The Right Number of Comparison Items

A good list of favorite comparisons will contain 15–30 estimated product backlog items. Fewer than that and you’ll struggle to find appropriate comparisons and will have to reuse the same items over and over again. That’s dangerous because if one of the selected items wasn’t well estimated, any small error is compounded by doing frequent comparisons against it.

You can’t have too many items on your comparison list. But most people fall back on using their few favorites over and over again. When manually selecting items for comparison you’ll most likely choose from the same 15–30.

It’s useful to remove items from the list as they age. A three-year-old item might have been well estimated and understood by the majority of team members back then. But by the time it’s three years old, the team may have many new members with no understanding of the old item. Even those who stayed with the team won’t remember the item with sufficient clarity for it to still be a good comparison item.

So remove old items from your comparison list as they age.

I’m thrilled to let you know we just made triangulating your estimates easier with our beta auto-triangulate feature inside our Agile Mentors Community Planning Poker tool. And through January 11, 2022, we’re making Planning Poker and this new feature completely free for anyone to use.

Here’s how it works: When a team is estimating, ANYONE on the team can click the auto-triangulate button. Normally this will be done by a Scrum Master, coach, or whoever is facilitating the Planning Poker session.

Your Favorites in Planning Poker

The items that are shown as comparisons are randomly chosen from a set of items that have been previously marked by a player as “favorites.”

In Agile Mentors Planning Poker, you can easily identify an item as one you’d like to use for future comparisons. To do that, simply click the star that is shown on the top left of any current item being estimated, as shown in the following image. A yellow star indicates the item has been marked as a favorite. Items not selected as favorites are shown with an empty outline of a star. 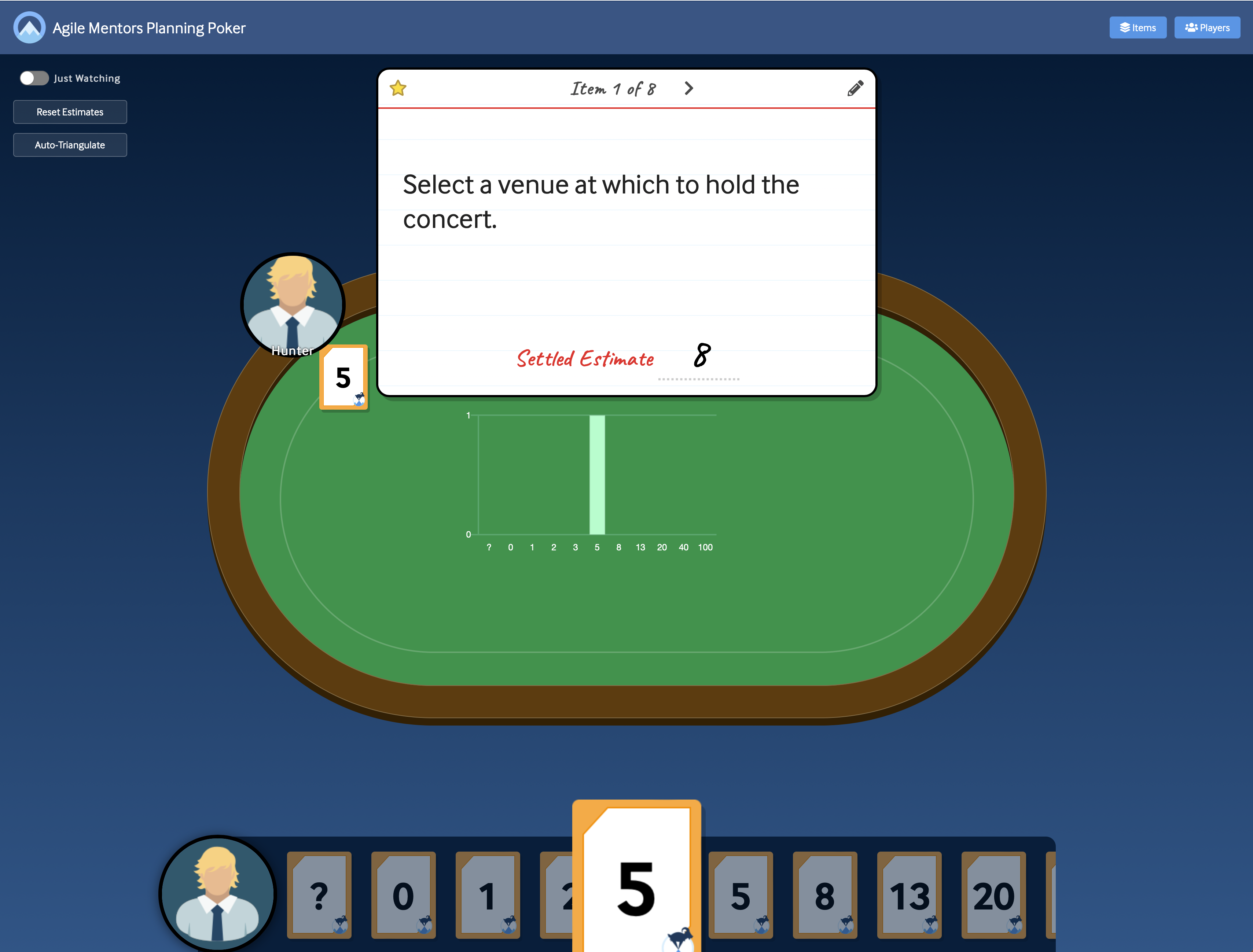 You can see a list of all marked favorites by clicking the Items button in the top right of the window. That will display the Items window with a Favorites tab showing selected favorites as can be seen in the following image. From this page you can remove any item you no longer want favorited for use in auto-triangulating. 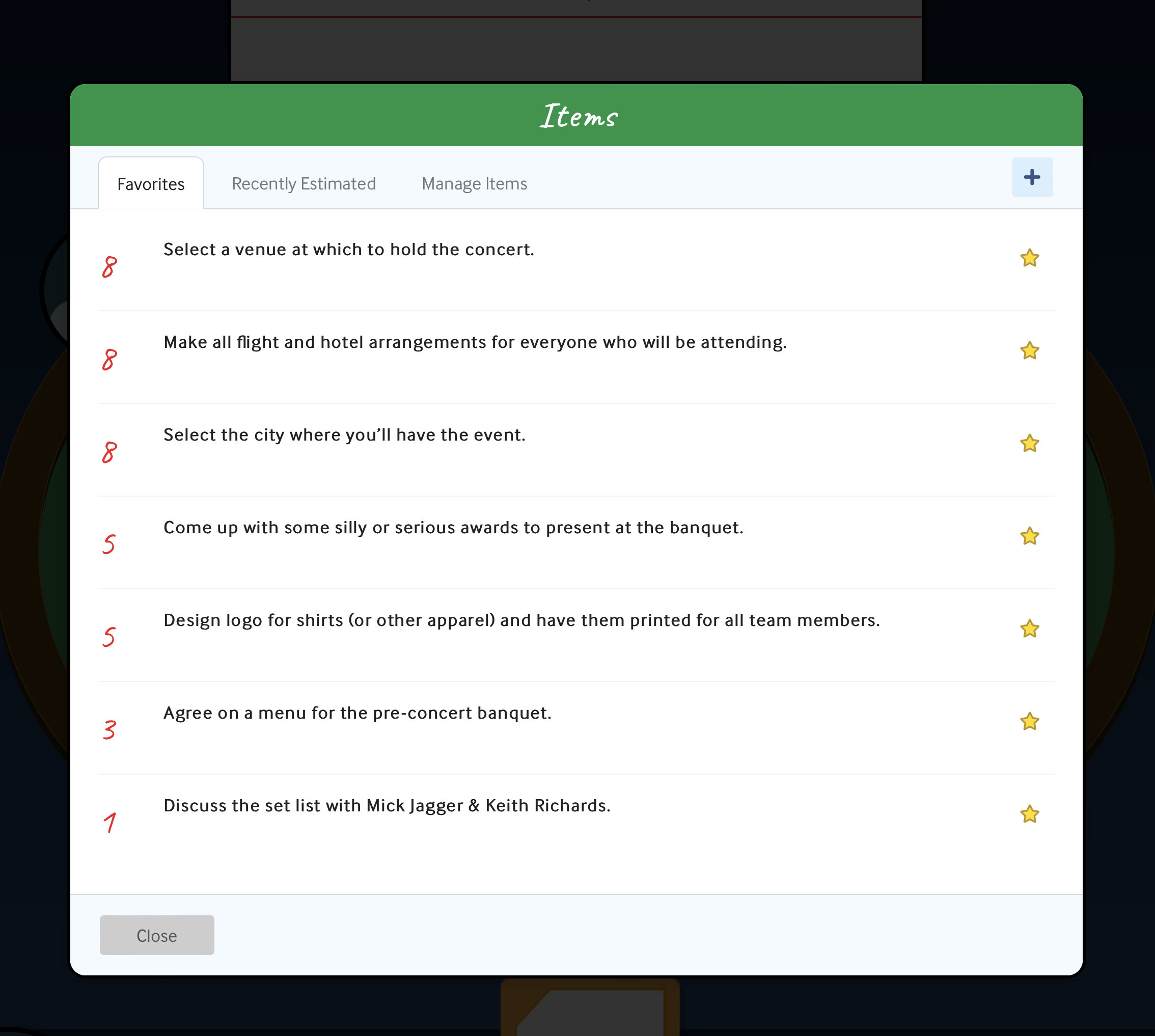 How Comparisons Are Selected

If you tell the system to auto-triangulate around 8 points, Planning Poker will randomly choose to display one of the two items estimated at 5 points. And it will show E, the one favorite that was estimated as 13.

If instead you request an auto-triangulation around 5 points, estimators will be shown the 1-point story and the 8-point story. This team was presumably using the Fibonacci sequence but no items estimated as 2 or 3 points had been favorited. Planning Poker, therefore, selects the next lowest number, which is 1 in this case.

Your favorites persist between sessions, of course, so you can compile a list of great backlog items to compare against.

I’d love you to try out this new beta auto-triangulate feature, and through January 11, 2022 we’re making Planning Poker free to try.

In fact, to celebrate Black Friday, we’re offering you a free trial of the entire Agile Mentors Community.

Sign up for a free trial account before Friday December 3, 9pm Pacific, and you’ll get full membership access including my resource library, my entire archive of weekly tips, a thriving forum where you can ask questions and network, and much more until January 11, 2022.

To find out more about the free trial, and to register, click here.