After The Megafires: What’s Left And What’s Next 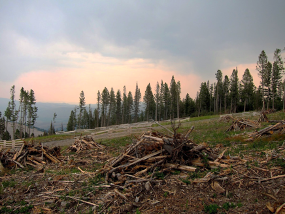 Something is clearly different about the wildfires roaring in the western United States. Over the last decade, we have increasingly used terms like “megafires” and “gigafires” (fires that burn more than a hundred thousand, and more than a million acres, respectively) to describe them. They’re staggering, not just in size, but also severity. Fire seasons are lasting longer, and lifelong firefighters are getting mentally and physically burned out. 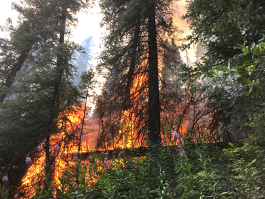 Flames of the 2018 Lake Christine fire climb up “ladder fuels” into the crowns of dense forests atop Basalt Mountain in Colorado. This fire necessitated the evacuation of many residents of Basalt, CO, and the Aspen Global Change Institute office. Photo credit: Emily Jack-Scott.

We know fires have a long history in western montane ecosystems, but the fires of the last couple decades are a new beast. We’re seeing a perfect storm play out – the result of long-term fire suppression initiated by Euro-American colonists, climate change, and more people than ever building permanent dwellings in fire-prone forests (for more on wildfire attribution refer to our previous research review). We’re left with a new reality of increasingly frequent, more intense wildfires, greater loss of property and life, and a multitude of questions about what will be left when the megafires are out.

What kind of ecosystems will regenerate? How long will it take to see new growth? Will these continue to be landscapes humans and other animals can inhabit? For those of us living in the West – breathing thick smoke for weeks on end, watching neighbors and loved ones troop off for months to battle blazes – these questions are deeply personal and increasingly urgent.

The latest scientific research confirms that we must be prepared for a dramatically altered landscape in the coming decades. In 2020, Coop and colleagues published research illustrating how relatively small changes in fire behavior have widespread impacts, converting forests into non-forests over massive swaths of the West. As summarized by Coop, many researchers are forecasting fire-driven conversion of 30 to 50 percent of most western conifer-dominated forests into non-forested shrublands, grasslands or hardwood-dominated ecosystems before 2100 (Coop et al. 2020). 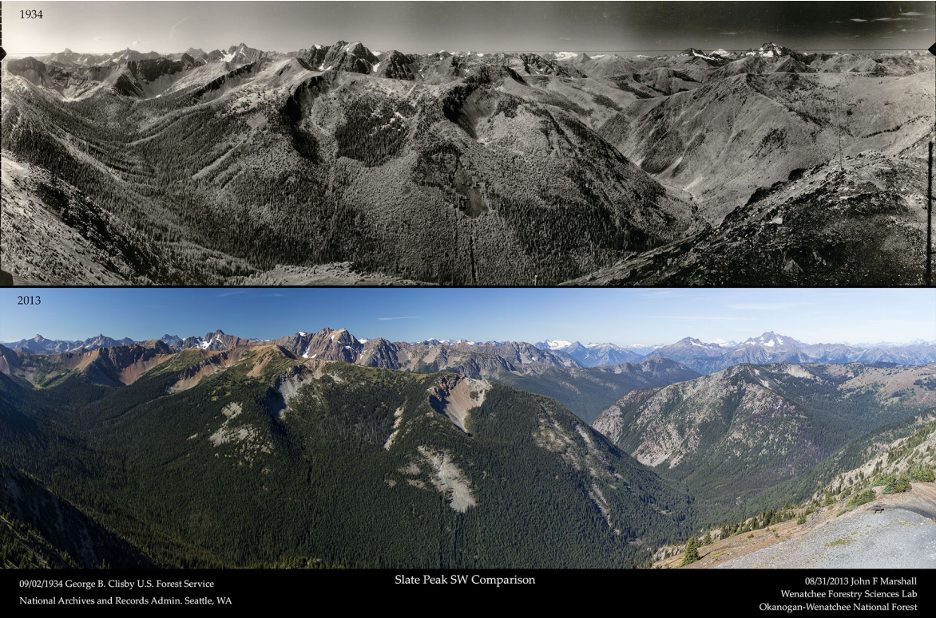 Historically, fire-adapted forests evolved to tolerate low- to moderate-severity fires. Because fires burned on regular intervals, forests were often more open, and understory plants were less likely to grow tall enough to serve as “ladder fuels” (serving as a ladder for fires on the ground story to climb up into the crowns of trees, escalating the fire intensity). Even if smaller younger trees perished in those fires, larger older trees could withstand the ground fires and provide a seed source for trees to regenerate amidst the grasses and shrubs that opportunistically sprout in the wake of fires.

But we’re seeing higher severity fires, in denser forests, over larger areas. As Hagmann and colleagues explore in depth in their 2021 paper, there is overwhelming evidence to confirm changing forest conditions and changing fire regimes. Fires now climb more easily up into the crowns of mature trees, and burn too hot for even thick-barked mature trees to withstand. And because our forests have lost their heterogeneity of ages and structures (see Figure 1), megafires are scorching more uniformly over broader swaths. So megafires are leaving behind tens, or even hundreds of thousands of acres scorched without enough seed trees to contribute to the usual succession of plant species that have historically regenerated after fires in the West.

Even when seed trees persist, soils can be so scorched that their life-giving nutrients actually volatilize into the atmosphere. Soil structure can be so altered that instead of absorbing water they actually repel it, rendering them far more prone to erosion. So even the most resilient of landscapes are left barren and dry after high severity fires. In these cases, it can take decades to rebuild even baseline conditions hospitable enough to support the natural succession of forests. And that’s assuming historical climatic conditions.

Climate change is creating hotter and drier conditions which further deter recovery. Seeds have a harder time germinating and growing to maturation, and fires are more frequent – sweeping through areas still in early recovery stages after the last severe burn.

These dynamics all culminate in what ecologists refer to as conversion – a transformation into a new ecological state, with new dominant species, usually filling different ecological functions. The conversion of a forest to a non-forest may happen as the result of a single large, high-severity fire, or it may happen as the result of post-fire conditions that make the burned area more likely to burn again before forest regeneration can occur (Figure 2).

Figure 2. Processes that may give rise to fire-driven forest conversion. (a) Conversion is initiated by processes that result in extensive areas of adult tree mortality (the solid arrows; red represents fire, and yellow represents climate). (b) Conversion is maintained by processes that impede regeneration of pre-fire tree species (dashed red and yellow arrows) and protract vegetation change temporally. (c) The duration of forest conversion may be further influenced by positive and negative fire–vegetation feedbacks (dashed purple arrows), which respectively promote or inhibit additional burning. Source: Coop et al. 2020.

When dense forests burn, they leave behind partially burned dead and dying trees for the next fire to re-burn in the same area. These secondary high-severity fires can actually burn hotter than the initial fire, killing off any seedlings or young trees and reinforcing conversion. This is especially true at the edges of forests, where trees are often already at the limits of tolerable growing conditions (Parks et al. 2019).

So what can be done? The scale of this challenge is massive, and outstrips current management techniques and budgets. But managers do still have the options to engage in strategic operations, especially in “high value” locations (such as in high-use recreation areas, timber stands, municipal watersheds, or near residential areas). It comes down to a choice between resisting, accepting, or directing conversion.

Coop and colleagues lay out a great framework to help inform that choice:

Hessburg and colleagues echoed many of these recommendations in a 2021 paper. They acknowledge the understandable societal resistance to large-scale management techniques – the result of broken trust as a result of extensive logging of old growth forests in the 1900s. But they make the case for intentional and proactive management of western forests in the form of prescribed fires, managed wildfires, and silvicultural treatments.

They argue it is critical to cut through the politicization of forestry management approaches, in order for western forests to better adapt to climate change and high-severity wildfires. They advocate for application of best available science (including Indigenous and western knowledges) in designing intentional management strategies, even though there will be unavoidable uncertainty in that science. On this point, they lean into a discussion about not having the precautionary principle unnecessarily translate into inaction.

Under the precautionary principle, a decision-maker must demonstrate in the face of uncertainty that the most likely outcome is one of no harm. But given the inherent uncertainties at the convergence of changing climate and changing fire regimes, they caution against basing decisions about forest management solely on that principle. This can lead managers to assume a course of non-action, deferring to natural processes alone. Rather, they lay out a series of questions to inform decision-making under uncertainty:

Ultimately forest managers are entering a new era. The heat is on for managers to counteract the massive threats to forest resilience we’re watching unfold. They will need to find novel ways to replicate low- and moderate-fire disturbances (through selective logging, prescribed burns, and managed burns), promote forest structure heterogeneity, and protect old growth forests and drought-tolerant trees. It will look unconventional, and in reality may be experimental at times – but the alternative of nonaction renders many western forests at risk of conversion, and ultimately the loss of many of our forested habitats.