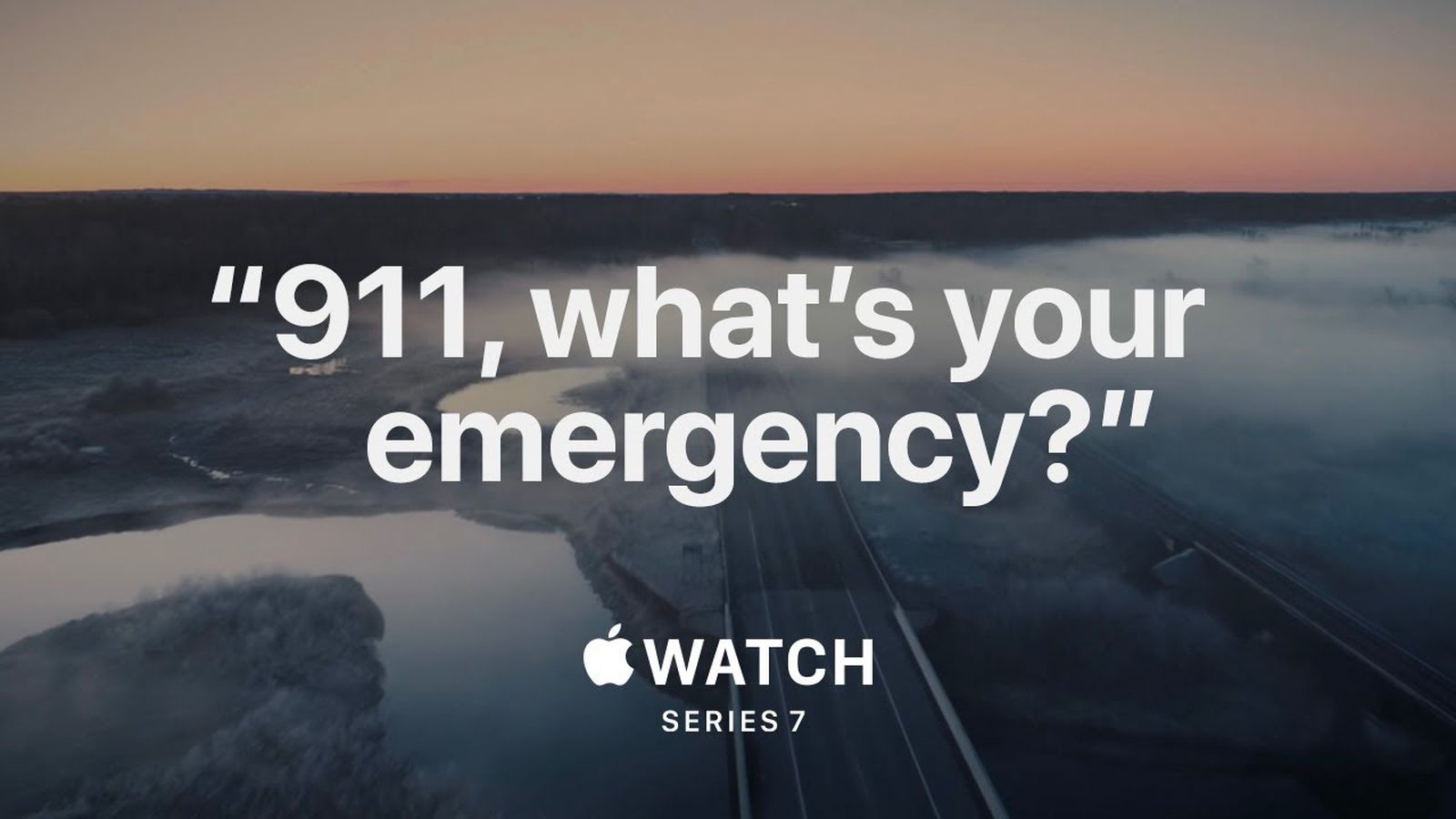 The suspenseful ad revolves around three individuals named Amanda, Jason, and Jim who were each able to get help by dialing 911 using the Apple Watch, with the ad highlighting excerpts from their frantic phone calls with dispatchers. Amanda, for example, said that her car had flipped over and was starting to fill up with water.

Fortunately, the ad concludes that all three individuals were rescued in minutes. “These are just three of many incredible stories where people were able to get help using Apple Watch,” wrote Apple in the video’s description.

The ad suggests that buying an Apple Watch could help save your life in emergencies where you don’t have access to your iPhone by allowing you to dial 911 from your wrist. Apple Watch has an Emergency SOS feature that allows you to quickly get in touch with emergency services by pressing and holding the watch’s side button and dragging your finger on the Emergency SOS slider that appears on the screen.

Bob B. was knocked unconscious mountain biking in the forest. His Apple Watch detected the hard fall and automatically called 911 with his location. The future of health is on your wrist.
— Apple (@Apple) December 20, 2021

Police departments are complaining that they are getting an increasing number of accidental phone calls from Apple Watch users, according to local news outlet Fox Kansas City. A spokesperson for Overland Park police explained that most of the accidental calls it receives seem to be coming from Apple Watch users, who unintentionally brush against the watch’s screen or side buttons. Most of…

Apple is working on a “crash detection” feature using data from million of iPhones and Apple Watches that could launch in 2022, according to a recent report. Citing internal company documents and people said to be familiar with the matter, the Wall Street Journal reported last month that the new feature could use the iPhone and Apple Watch to automatically detect when a user is involved in a …

Rumored Apple Watch Lineup for 2022 to Include Three New Models

Respected analyst Ming-Chi Kuo has today thrown his weight behind rumors that Apple is planning to launch three new Apple Watch models in 2022. In a note to investors seen by MacRumors, Kuo said that the 2022 Apple Watch lineup will include the Apple Watch Series 8, the second-generation Apple Watch SE, and a new “extreme sports” version:The new Apple Watch in 2H22 includes Apple Watch 8,…

The watchOS 8.3 release candidate has expanded AssistiveTouch, allowing users to control their Apple Watch using only hand gestures, to older Apple Watch models after the feature was previously exclusive to only newer Apple Watches. Apple first previewed the feature in May as part of its continued commitment to making its products accessible to as many people as possible. AssistiveTouch uses …

Apple’s plans for an “Apple Watch Pro” recently emerged, indicating that the company was considering a “Pro” moniker for a high-end smartwatch. According to files on an Apple Watch demonstration unit used in retail stores from 2015, Apple considered using the brand name “Apple Watch Pro” for some smartwatch models around the time of the Apple Watch’s launch. The information was shared by…

Apple is planning a new feature for the iPhone and Apple Watch that would enable the devices to detect if you are involved in a car crash and automatically dial 911 for emergency services, according to The Wall Street Journal’s Rolfe Winkler. Apple plans to launch the “crash detection” feature in 2022, the report claims, citing company documents and people familiar with the matter. The…

5 Products Discontinued by Apple in 2021

Apple announced several new products this year, ranging from the colorful 24-inch iMac to four iPhone 13 models, but we also said goodbye to some other products. Below, we’ve recapped five products and accessories discontinued by Apple in 2021. HomePod In March 2021, Apple announced that it was discontinuing the full-sized HomePod in order to focus its efforts on the HomePod mini. At the…

Apple in October introduced the redesigned third-generation AirPods, which have an updated design, Adaptive EQ support, spatial audio, and other new features. To explain some of the design decisions Apple made with the AirPods 3, Apple’s vice president of acoustics Gary Geaves sat down for an interview with What HiFi (via 9to5Mac), providing some interesting insight into the limitations of…

Apple’s AirTag item trackers are increasingly being used to support criminal activity, according to recent reports from around the world. AirTags, which use Apple’s Find My Network, can leverage nearby devices to transmit their location, providing bad actors with a new means of finding individuals and high-value cars. The relatively low price of AirTags, costing as little as $25 each when…

2021 was a whirlwind of a year when it came to Apple rumors. Many of the rumors this year turned out to be accurate, like the MacBook Pro getting a notch, but some failed to materialize, like the flat-edged Apple Watch Series 7. With the year now drawing to a close, we thought it would be fun to look back at six of the biggest Apple rumors of 2021. 1. MacBook Pro With a Notch Out of all…