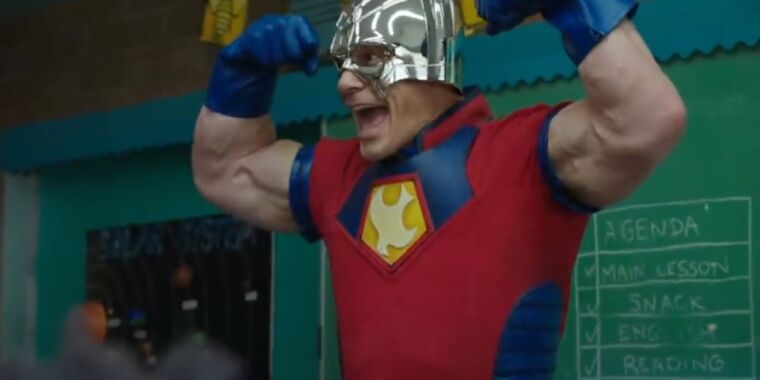 It’s a brand new year, and HBO Max has kicked it off with a shiny new red-band trailer for Peacemaker.

As we’ve reported previously, the eight-episode spinoff series is set after the events of Gunn’s 2021 filmm The Suicide Squad—specifically after the post-credits scene, in which we learned that Peacemaker had survived what had appeared to be a fatal shooting. The first teaser dropped in October, showing Peacemaker (aka Christopher Smith) being recruited by Clemson Murn (Chukwudi Iwuji) for another mission in order to avoid going back to prison.

An extended teaser released in October was heavy on the cheesy, off-color bro-humor, but it showcased Cena’s gift for physical comedy, and the irreverent, over-the-top tone was note-perfect—very much in line with the character.

The full trailer, released last month, fleshed out the basic premise and gave us a Peacemaker who was a bit less mindlessly violent and more introspective after the Very Bad Events of The Suicide Squad. He had qualms about being ordered to kill women and children, for instance, and struggled to deal with long-suppressed daddy issues. (Among the standout lines: Peacemaker trying to have a heart-to-heart with his imprisoned father: “Maybe I’m a grower, not a shower. An individual you don’t and then you learn to like.”)

And now we have the red band trailer, which returns to R-rated zaniness. The trailer opens with Peacemaker making a special appearance at a local elementary school, bragging about how he defeated the world’s most dangerous villains “with only my two fists, my desert eagle, and two rocket launchers.”  Oh, and also that one time he met Wonder Woman. (“She did spend an entire party eye-f—ing me from across the room.”) Hey, he’s trying, okay? It’s hard to strike the perfect balance between embodying the murderously efficient SOB his current mission needs, and being a decent human being capable of functioning in normal society.

Harcourt is gonna be a harder sell than the schoolkids. “Just because you’re handsome doesn’t mean you’re not a piece of s–t,” she tells him after he says she can call him Chris. And because deep down he’s incredibly insecure, all he hears is that she thinks he’s handsome. There’s a lot of off-color hijinks and profane humor—Eagley gets a bit inappropriate with Economos, and Peacemaker seems just fine with Vigilante being tortured—and of course, there’s a fair amount of red-band worthy gore. The cast looks like they’re all having a great time, so this series is definitely on our watch-list for January.

The first three episodes of Peacemaker premiere on HBO Max on January 17, 2022. New episodes will air weekly every Thursday after that through February 17, 2022.

Magnificence Begins When You Resolve to Be Your Attractive Self –

ios – SwiftUI Binding Has Previous/Mistaken Worth