Offshore Wind Turbines (All you need to know) 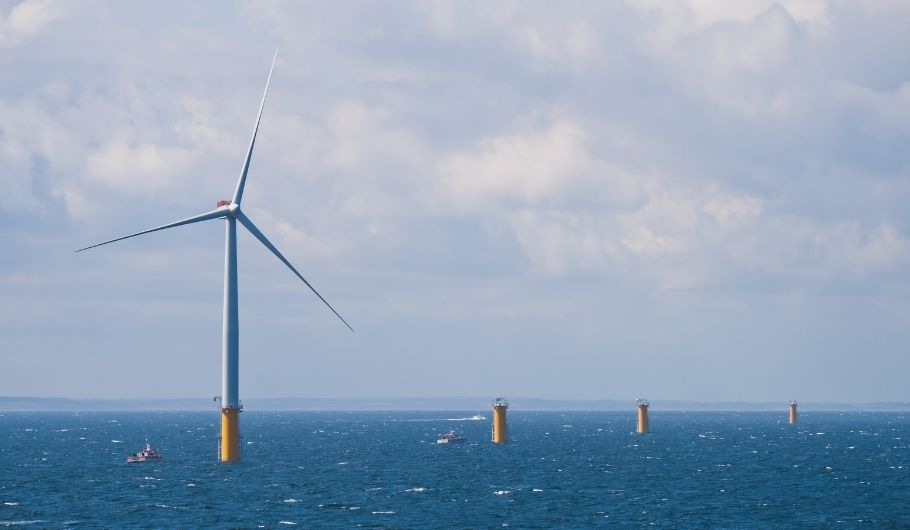 Have you ever wondered about the workings of offshore wind turbines?

If you’ve ever taken a road trip along the coast, chances are you’ve witnessed these wonderful machines at work, harnessing renewable energy from wind currents present above the sea.

While not as widespread as other renewable energy technologies, offshore wind turbines are a key component for the decarbonization of electricity. They also contain huge development potential.

For example, in 2018 the European Union had a total electricity demand of 2.884 TWh. Now consider the fact that their total offshore wind potential is 33, 844 TWh.

In this article, you’ll learn all there is to know about this technology and its importance in helping to generate clean electrical energy.

We put a lot of work into designing, researching, writing, editing, and reviewing these articles. Please consider supporting us by making a purchase from one of the affiliate links included in this post.

What is an Offshore Wind Turbine?

The Cambridge Dictionary defines the term offshore as “away from or at a distance from the coast”.

Where It All Began

While the history of using offshore wind for other purposes is rather old – think navigation – offshore wind turbines and farms (group of turbines) are a relatively new industry.

The United Kingdom and the European Union are leading the way in installing offshore wind power capacity.

Other big players such as the U.S. and China have had a late start on the deployment of these turbines. They do however have ambitious plans for the future.

Why would anyone want to build wind turbines in such a difficult place? After all, constructing and maintaining electrical machinery at sea isn’t exactly easy.

The answer lies in the wind resource that can be found offshore. It’s considerably better than wind onshore. This is due to less turbulence, better wind speeds and more consistent airflow.

These characteristics mean that wind at sea has more energy yield and allows for better generation.

How Do Offshore Wind Turbines Work?

An offshore wind turbine works in the same manner as any other wind turbine. If you’d like to know more, check out our previous article on How Wind Turbines Work.

An Extra Step Or Two

However, these turbines and the wind farms that use them require extra steps in order to get the generated energy to the users.

Once the wind turbine and its equipment convert the air current’s kinetic energy into electrical energy, we need to transport it from offshore to a land-based grid.

For that purpose, we transport the energy from all the wind turbines via a collector system. This is a network of underwater high voltage cables (typically 24 to 35 kV) to an offshore substation located close to the wind farm.

The substation increases the voltage to even higher levels (typically 115 to 230 kV) via a step-up transformer. Then, a single underwater circuit sends energy to a substation on land, connected to the electrical grid.

These extra steps help transport energy all the way from generation to the electrical grid. It’s then ready to transport and distribute to users.

How Efficient Are Offshore Wind Turbines?

Wind turbines generally have an efficiency of around 40 – 50%. As such, almost half of the wind’s energy is transformed, while the rest goes unused.

Offshore wind turbines work under the same principle as onshore turbines. As such, we need to use a metric that truly demonstrates why these machines are such a big deal.

Capacity factor – a metric of how much a machine’s capacity is fully used – is one such metric.

Let’s compare how the same 1 MW wind turbine would fare on land vs offshore.

We’ll estimate the energy output in a year with the following equation:

A year has 8760 hours. We’ll also consider the best-case scenario of a land wind turbine with an average capacity factor of 44%. The result would be as follows

Now, let’s transport our wind turbine to an optimal offshore location, with an average capacity factor of 52%:

Just by placing the same wind turbine offshore, we have gained an extra 18% increase in energy, isn’t that great?

You might think that this outstanding performance is enough reason to prioritize the development of offshore wind farms against other renewable energy technologies. However other factors come into play, as we’ll see ahead.

How Much Does An Offshore Wind Turbine Cost?

As you might already suspect, offshore wind turbines are more expensive than their counterparts on land.

This is because of the following reasons:

These reasons resulted in an average cost of installed offshore wind energy in 2020 of $3.720 per installed kilowatt.

While almost tripling the cost of onshore wind turbines, the industry has reached a cost reduction of 35% from its peak in 2013 – 5,721 USD/kW. This is a great improvement.

More importantly, this trend is expected to continue, reaching costs around 1,000 USD/kW in the following 10 to 15 years.

To understand the costs of a whole offshore wind farm, let’s take a look at the largest farm up to date, Hornsea Project 1. It consists of 174 wind turbines and a total installation rated capacity of 1.218 MW.

How Much Electricity Do Offshore Wind Turbines Produce?

The electricity output of a single offshore wind turbine depends on two factors:

To understand how much they contribute to clean energy generation, let’s take a look at the following metrics:

We’ll answer this by looking at their design life. This determines how long equipment will last.

Most manufacturers offer wind turbines with a design life of around 20 – 25 years.

Nevertheless, a well-maintained wind turbine that has not been exposed frequently to extreme weather conditions can last longer, with some cases of offshore wind farms having their lifetime extended to 30 years.

Even though their life can be extended even further, it’s not the most economically viable option, as operation and maintenance costs of old equipment only rise over time. At a certain point, this becomes unsustainable.

Because of this, wind farm sites go through a “repowering” process, which is basically removing all the old turbines and replacing them with newer and better ones, while using the same location.

In the long term, this is the best solution, as the repowered wind farm will work more efficiently and generate more revenue than just keeping the old farm functioning.

While we’ve covered some of their advantages before, we can sum up the most important ones below:

As the saying goes, all that glitters is not gold, and offshore wind turbines are no different. They do have some disadvantages compared with other types of renewable energy technology.

While it’s unfortunate that wind turbines come with disadvantages, these can instead be seen as opportunities for improvement in the industry.

Offshore wind turbines are amazing technological developments, with an important role in helping us reach sustainability in the electricity we consume.

The availability and potential of the wind resource at sea will drive the future development of more offshore wind farms. We’ve already seen this happen recently in China and the United States.

Sure, if you compare these machines to other forms of renewable energy tech, they’re costly. But, cost trend reduction allows us to envision a future where offshore wind plays a much bigger role, worldwide.