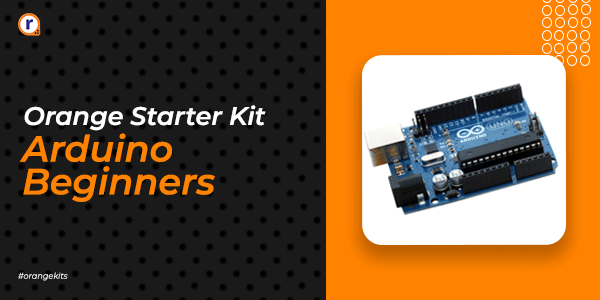 Since there are so many things to learn about Orange Beginner Kit for Arduino, we must have a roadway, because without a road we cannot get to the destination.

But in this blog, I have covered everything that I wish I had when I was learning Arduino.

And I believe that these things will help you to understand the concepts of Arduino and moreover, if you face any problem while learning this Arduino kit, you mention your doubts in the comment section and our team Will help you in a proper solution.

So let’s start on the quest to learn new things.

We are getting the following components with the orange Beginner Kit.

These are the components that you get with this kit. These components are selected on the basis of their importance and difficulty level and I am pretty sure you will love working with them.

This Orange Beginner Kit is available in three variants.

You can buy your favourite board and start working on it.

So, the first component in this kit that I want to explain to you is the IR Remote.

Nowadays you see IR remote everywhere. The device you use to control your TV, fan, is nothing but an IR remote. Using an IR remote you can control any device with IR. But do you know how this IR remote works?

The answer is very simple. The IR remote consists of two units. One is a transmitter and the other one is a receiver.

The entire unit is powered through a coin cell battery.

It was about the IR transmitter; Now we will talk about the second section of the unit and that is IR Receiver, it is nothing but a photoreceiver. When you press any button on the remote, that button connects to the timer IC and then the IC turns on the IR LED in a specific pattern.

It was about the basics of IR remote. In the next section, we will understand the interfacing of IR module with Arduino.

In this section, we will understand how to interface IR receiver with Arduino. The IR module that you are getting with this module has three pins to connect to any microcontroller or any microprocessor. I have explained the function of those pins below.

GND – Here we have to connect the GND pin of the Arduino to this pin.

VCC – Connect the Arduino’s 5V pin to this pin.

Signal – You will find the module’s output on that pin. You can connect this pin of the module to any GPIO pin of the Arduino.
In my case, I have connected this pin to the 5-digit pin of Arduino.

You can also refer to the following image to understand the interfacing properly.

So, let’s get back to the discussion of the Arduino code for the IR remote. We will find an IR remote library on the internet.

As you know how to add a library, you can add the following library to the Arduino IDE.

Ok, now you can use the following code to start working with the IR module.

This is it about the IR receiver, if you have any doubts then please let us know in the comment section.

So, this is how we learned about IR sensors. In the next part of this blog, we will learn about the seven-segment display.

A 7-segment display is nothing but a pack of seven LEDs connected together where each LED is known as a segment. All of them can be controlled individually.

Each LED in 7-segment display is connected separately to GPIO pins on Arduino board.

As the anode is the common terminal here so let us connect it to the 5V supply on Arduino. The remaining pins will be connected to the GPIO pins on Arduino.

We will be using separate wiring (refer to the connection diagram) for each LED segment and turn on the display in an ornate fashion.

You can use the following code to work with the seven-segment display.

One more thing to understand the logic of the Arduino code; you can refer to the following truth table.

If you have any doubts, you can comment below.

You must have seen the variable knob on the audio system. We use that knob to adjust the sound level.

In electronic terms, that knob is called a potentiometer and is nothing but a variable resistor. The output of the potentiometer varies according to the change in resistance.

It has three pins. I have mentioned the functionality of those pins below.

Vcc – The positive pin of the power supply will be connected to this pin.

Signal – On this pin you will find the output of the potentiometer.

It was about the introduction of the potentiometer. In the next part of this blog, we will learn how to interface a potentiometer with Arduino.

Talking about the output pin of the potentiometer, you can connect to any GPIO pin of the Arduino.

Please refer to the following image to understand the connection diagram.

Interfacing Potentiometer with the Arduino

Since the interfacing diagram of the potentiometer is easy, the Arduino code for it is also easy. You can use below code to work with potentiometer.

You will see the output of the code on the serial monitor.

So, in this way, you learned how to interface the potentiometer to Arduino. In the next part of this blog, you will learn about the flame sensor.

There are different flame sensors available in the market. What you are getting with this kit is an IR flame sensor.

The answer to this question is, IR sensors are designed to capture visible gases in the infrared spectral band.

When an explosion occurs, the light produced by the flames is reflected in the infrared spectral band and generates a flame sensor signal based on the received frequency of the light.

Please refer to the image below to understand the wiring diagram.

The code is very simple and does not require any explanation. In this code, we have used a variable and the function of that variable is to collect the output of IR flame sensor.

Then we are printing that output to the serial monitor.

Please use the below code.

Buzzers are used in many instruments. It is used as an indicator in many systems such as home appliances, alarm systems, electronic bells.

Talking about the working principle of the buzzer, the buzzer converts electrical energy into sound energy.

When voltage is applied to the buzzer, the piezo crystal expands and contracts inside the plastic casing. This causes the plate to vibrate near the crystal and the sound you hear is of that vibration.

Changing the frequency to the buzzer changes the speed of the vibration and, as a result, you hear a variety of sounds.

So, it was about the buzzer. There are two main types of buzzers. Active buzzer and passive buzzer. In the next section of this blog, we will now understand the difference between these two types.

Difference Between Active And Passive Buzzer

As I mentioned earlier, there are many types of buzzers. Active buzzer and passive buzzer.

If you want a passive buzzer to produce a sound signal, you must give a different frequency to the buzzer.

As you have wired the buzzer. Now, we will move on to the Arduino code for the buzzer.

The code for the buzzer is very simple. You just need to use the digital write function and apply high or low voltage to turn the buzzer on or off.

You can use the following code to turn on the buzzer.

Vibration sensors are used in many devices such as mechanical machines. It is used to measure the frequency of vibrations generated by machines and those measured frequencies are then converted into voltage signals.

Interfacing the vibration sensor with Arduino is super easy. It has three pins, two for powering the module and one for output.

You can refer to the following image to understand the wiring diagram.

Interfacing Vibration Sensor With the Arduino

After uploading the code to the Arduino board, you can open the Serial Monitor and see the output there.

Have you ever felt that your Arduino has fewer pins than the requirement? When I work with big projects I face these types of issues more often.

In those cases, we get only two options, either we use another Arduino and write part of the code for no reason or use a shift register.

Shift register not only saves our time but it also saves the bad connection that we make while working on a big project.

In this kit, we are using a 74HC595N shift register which has three input pins and eight output pins.

Now, we will understand the interfacing of 74HC595N with Arduino.

So, before we talk about interfacing a multiplexer with Arduino, we will understand the pinout of the IC.

Now we have to enable the IC to work with this IC. And to enable IC we need to connect GND pin of Arduino to IC’s 8, 10 and 13.

This is about the introduction part of IC. In the next part of this blog, we will understand how to program the Arduino.

I have designed the following Arduino code for 74C595N. This code is generating the output on the output pin of the 74C595N.

In this section of this blog, we will learn about different types of projects that we can design with the help of this kit.

You must have seen fire alarm systems in many places. Such systems are designed to avoid casualties in an explosion.

To complete this project, we are going to use the following components.

Please check the following interfacing diagram to understand the connection.

When the output value of the flame is crossing the set value we are turning on the buzzer.

So this was about the Fire alarm system.  You can use the following code now.

According to me you may not have any issue. but if you face any issue, please mention your issue in the comment section. However, if you found any discrepancy, kindly comment below.

We have already talked about the basic things so you check the required information in the above section of the blog.

The connection diagram is similar to the diagram shown in the above sections.

We have installed vibration sensor on breadboard and its signal pin is connected to GPIO pin of Arduino.

You can refer to the following image to understand the connection diagram.

Interfacing Vibration Sensor With The Arduino

We are using the same logic the one that we used in our previous section. In the code below we have used a variable to store the output of the sensor.

And once the output of the senor crosses the certain limit the code will turn on the buzzer.

You can use the following code and see the results by vibrating the sensor.

If you have any doubts about this section please let me know in the comment section.

So, in this way we have learned about the components that we are getting with the orange Arduino beginner kit.

We also have learned about the projects that we can design using the components of this kit.

I have covered everything that is needed to learn this kit in a better way. However, if you found any discrepancy, kindly comment below.

ios – SwiftUI animation: transfer up/down on press, spring on launch – the best way to do the “transfer up” half

RPX Vs. IMAX – Discover the Distinction?